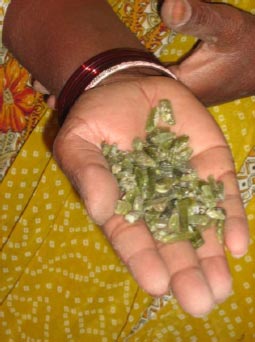 Mohini Devi, 28 is the group leader of women’s group in Dudu village. Her relationship with PSC has been long and her loan requirements have been diverse. She is a mother of 3 who now go to regular schools. Mohini’s situation before her association with PSC was very different because she was not an earning member and her family income was only dependent on her husband’s daily wage which was insufficient.

To contribute her family income Mohini started working as paid laborer at others houses for the Nagina work (gem polising, in picture). Later she took the $200 from PSC in 2006 to initiate the Nagina work at her house which required her to buy machines and hire labors. Her own business was not very successful initially and she became defaulter in repaying her loan. She approached PSC office and discussed her situation with the Branch Manager. She explained that if she get can get some more help from PSC she can revive her business. Branch Manager later had discussion with other members of the group who were willing to take responsibility of her loan repayments. Group member repaid her previous loan and in 2007, Mohini received another loan of $250 from PSC. Second loan helped her to revive her business after a lot of hard work. Soon she started saving $100 every month. Later she clubbed her saving with her husband’s saving to repair her house. 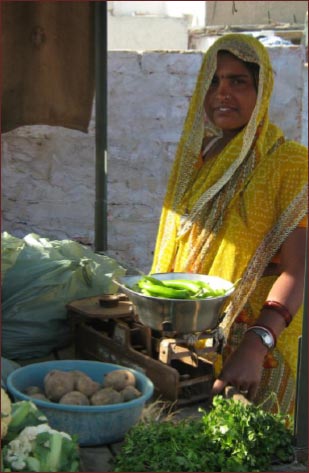 Unfortunate struck again on her growing business last year when global financial crisis reduced demand of policed gems in the international and local market. She again approached PSC to support her to start a vegetable vending shop in the local market. PSC helped her to understand that financial crisis will not last long and good time for her will come back, but she was not willing to wait as her husband’s income was not enough for them to take care of schooling of their children.

With the help of PSC she started vegetable vending shop (in picture) in 2009 and continued her entrepreneurship stewardship to support her family income. Recently she took $350 loan from PSC to expand vegetable shop and also to revive her ‘Gem Polishing’ business.

Mohini is an icon for many women in her village. Her spirit and her energy are infectious and all the women in her group and her neighborhood are impressed with her ability to fight back and not just cry over split milk. On asking about the support given by PSC she said ‘my whole family is indebted to PSC, I can’t believe they stand by me in the difficult times.

PSC is established as one of 25 Grameen Bank replicators, it started its functions with seed funds from the Grameen Trust of Bangladesh and investment capital from a group of Investors.